When casualties or Sarah Winchester are captured with the WINCHESTER RIFLE, they return as move-replaying spirits that haunt the board.  Spirits can only be seen with the crystal diviner—a special piece that switches control every 3 turns—but they are dangerous whether you can see them or not (spirits will capture any pieces if they linger on them).  Columns block all spirits’ movement (and also their captures).  Blocked spirits become enraged, and while they remain angry, the crystal shrinks each turn.

But the end of the current game isn’t the end: when Sarah Winchester is captured, a new game begins and all previous spirits remain.  Play continues until the crystal diviner sees the ghost of its owner’s Sarah Winchester.  When this happens, it shatters, and the next player to capture their opponent’s Sarah is the winner.

Alternately, if the crystal becomes too tiny to see, the spirits take over the house and both players lose!  (Beware poltergeist activity when the crystal is small).

More complete rules are available in the "Rules" section of the game client.

Click a piece.  Green tiles show movement, red are enemies.  Drag a piece to a colored tile to move it.

Right click any columns on your turn to rotate them.

Hold down the Left Mouse Button for a couple seconds while over the crystal to start dragging it.  Release the button to drop it.

The local multiplayer version is faster (ghosts move every time any piece moves and the board is more chaotic), while the peer2peer version is slower and more "chess-like", whatever that means!

Public domain images from pixabay and wikipedia.  Construct 3 rawks.  Thanks to chess for being such a dogshit game.  Big ups to everyone who got blasted by a Winchester rifle and chased Sarah around her labyrinthine estate. 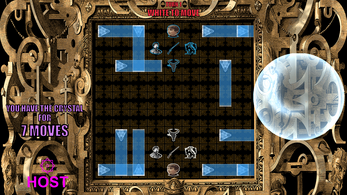